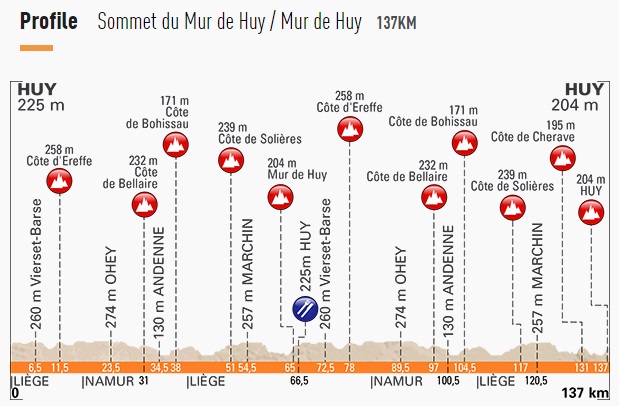 The weather will be fine at around 13degreesC and fairly windy, 28km/h in an ENE direction.

The start list can be found on the official website here. No TV coverage listed anywhere, it will likely be UCI highlights on Youtube the next day unless Sporza decide to cover it.

The route starts and finishes on the Mur de Huy, getting straight into the first of 11 climbs at the 11.5km mark (Côte d’Ereffe). Riders then have a tailwind almost all the way to Ohey, turning right before the next climb, Côte de Bellaire, at the 31km mark. Then it’s circles further right around and past Ardennes and with a cross headwind until the Côte de Bohissau a 38km. There follows a tricky technical part for 13km until the Côte de Solières. Then an irregular U shaped run through Marchin, towards Huy for around 11km until turning back to the start and the first time up the Mur de Huy. The race then repeats this route, adding in an extra few km just before the second and final Mur de Huy climb.

This is the first substantial race where the big 7 (Wiggle H5, RaboLiv, Boels Dolmans, Canyon SRAM, Cervelo Bigla, Orica AIS and Hitec) are competing with full rosters. Wiggle bring recent Euskal Emakumeen Bira winner Emma Johansson, with Audrey Cordon Ragot, Mayuko Hagiwara, Dani King, Elisa Longo Borghini and Anna Sanchis. Johansson is doing a Cancellara this season, but this race likely suits Longo Borghini better. She has finished on the podium twice in the last three years and must be smarting from being pipped to third overall due to bonus seconds at Bira by Cervelo’s Ashleigh Moolman Pasio. RaboLiv have Ms Vos along with Anna van der Breggen and Pauline Ferrand Prevot, the three winners of the past three years. Lucinda Brand, Kasia Niewiadoma and Thalita de Jong complete their line up. While on paper they are the favourites, and by far the strongest, we’ve seen before how their tactics and lack of a single leader has let them down when they’ve been the favourite before. However in this race it may not matter if they do all decide to just go for it, as the peloton isn’t likely to stay together for long. Niewiadoma might actually be their best bet this time. Boels bring Lizzie Armitstead, Karol Ann Canuel, Evelyn Stevens, Megan Guarnier, Ellen van Dijk and Katarzyna Pawlowska. Armitstead has said already that she’ll be taking a back seat until Rio 2016 (although always ready to step in if needed), and it does look as if the reason why they are so successful is because they take it in turns to support one rider on a rotating basis. Who’s turn is it? Armitstead, Guarnier and Stevens have had good results here. It’s ideal for Armitstead but maybe it’ll be Guarnier this time. Canyon SRAM have Hannah Barnes stepping in to replace Trixi Worrack, who is recovering from having her kidney removed after a bad crash. Alena Amialuisik will also be supported by Lisa Brennauer, Alexis Ryan, Elena Cecchini and Tiffany Cromwell. Cervelo Bigla have got their rhythm back with Moolman Pasio back to form. They’ve named Lotta Lepisto but she may not be recovered from illness in time, however with Carmen Small, Clara Koppenburg, Joelle Numainville and Stephanie Pohl they are well up there as favourites. Orica AIS have last years runner up in Annemiek van Vleuten, with a strong and on form team in Gracie Elvin, Amanda Spratt, Katrin Garfoot, Tayler Wiles and Rachel Neylan. Spratt left Euskal Emakumeen Bira early, likely in preparation for this race. They have been very consistent lately and have a very good chance. Hitec bring Lauren Kitchen as their leader, with a strong support team in Miriam Bjornsrud, Charlotte Becker, Tatiana Guderzo, Cecillie Gotaas and Ingrid Lorvik. Kitchen has had a string of top ten finishes so far this season, and has a good chance of adding another.

I’ll go for Moolman Pasio to take it.